Halifax HX324 was one of the twenty one No. 35 Squadron aircraft detailed to attack Magdeburg  on the night of 21st / 22nd January 1944

It was equipped with IFF, Gee, Nav Aid Y (H2S), Monica and Fishpond and was carrying 3 x 1000lb GP T.Inst and various Target Indicators. Its designated Path Finder role was Blind Backer Up.

HX324 failed to return and the squadron’s operations record book shows “This aircraft is missing, nothing being heard from it after take-off”

Wartime activities relating to the loss

On 22nd January 1944 the squadron informed Bomber Command, the Air Ministry and the RAF Records Office that the aircraft and crew were missing.

A telegram, along with a follow up letter from the Commanding Officer, was sent to the next of kin of each crew member advising them that he was “missing as the result of air operations on 21st / 22nd January 1944”. 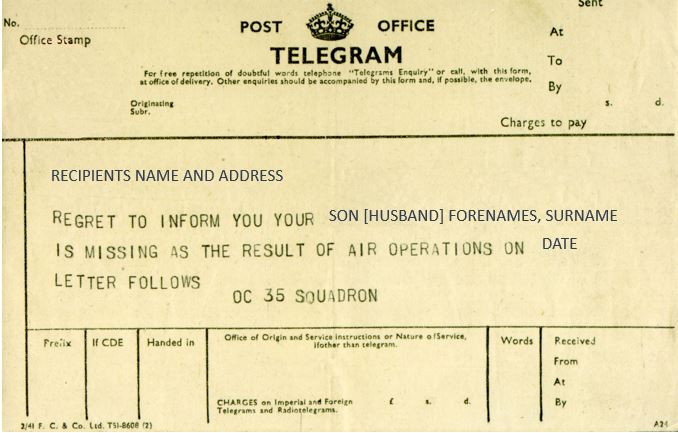 An example of the telegram that was sent

The Air Ministry Casualty Branch, which was responsible for investigating, monitoring and reporting on the status of missing aircraft and airmen, subsequently published the following information regarding the crew:

Note: Presumption of death enabled a death certificate to be issued; personal belongings could then be sent to next of kin, along with any monies due.

The squadron’s Operation Record Book shows the following information relating to the crew:

Crew members who survived the crash and were captured / imprisoned

TP McGarry, JR Humberstone and D Smedley survived the crash and were captured, interrogated and imprisoned for the remainder of the war.

Their POW Liberation Questionnaires, which were completed as part of the repatriation process at 106 Personnel Reception Centre (RAF Cosford) in 1945, show the following details:

After the war, an investigation officer from the Royal Air Force Missing Research and Enquiry Service (MRES) was tasked with locating the remains of the missing crew member(s).

Original German documents, burial records and eye witness accounts were utilised to establish the location of the crash site, the cause of the loss and the initial fate of the crew; information was recorded in a MRES Investigation Report.

As part of the process, any remains that were located were exhumed, identified (wherever possible) and concentrated (reinterred) at one of the Commonwealth War Graves Commission’s (CWGC) Cemeteries in the country that they fell, in accordance with Government policy at the time.

Graves were marked with a simple wooden cross, which was replaced by the familiar CWGC headstone during the 1950’s.

Missing airmen who could not be found, or formally identified, had their names commemorated on the Air Forces Memorial at Runnymede, which was unveiled in 1953.

The MRES report shows that the remains of JJ Jagger, E Hie, NJ Rapere and W Percival were located at Lüchow and exhumed on 27th May 1947. It was not possible to positively identify any of the airmen and, as such, the remains were concentrated (reinterred) at Soltau, Becklingen and their names recorded on the Runnymede Memorial as follows: 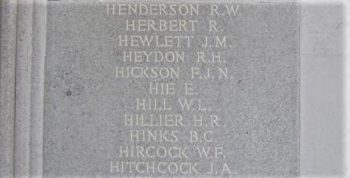 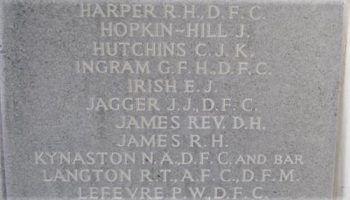 The MRES team established that the aircraft crashed 1/2 km W of Rehbeck, Germany and an eye witness report in their findings stated: “A four engine aircraft was observed approaching Rehbeck from the Southeast at approximately 22:00 on 21st January 1944. It was flying at a very low altitude and when about ½km west of Rehbeck at a height of approximately 100 metres it exploded in the air. The bombs had been jettisoned prior to the explosion. Cannon fire was heard and it is assumed that the aircraft was shot down by a nightfighter. The aircraft burned for approximately ½ hour. Debris from the wreckage was scattered over an area of about 500m in diameter. On the following day the Luftwaffe took the remains of the wreckage to Salzwedel. The remains of the aircrew were taken to Lüchow by the Burgermeister of Weitsche and buried in the new cemetery, Lüchow”.

If you would like information on an airman who served with the squadron, or …..

if you have copies of photographs or documents that could be included in the archive and/or published on the website, or …..

if you have any corrections, comments or information,

It would not have been possible to progress this project without the help of a large number of individuals who contributed information, photographs and drawings for inclusion on the site.

I would like to take this opportunity to thank you all for your time and effort; it is very much appreciated