Fairey Battle K9469 was being utilised on a night camera obscura training exercise at RAF Cottesmore on 5th May 1939.

The AM Form 1180 shows “Engine failure at 200′ just after take off; crashed into ground on left hand diving turn (trying to return to drome). No time to forced land or restart engine. All crew were killed”

A verdict of “Accidental death”  was returned at an Inquest at Cottesmore aerodrome on Saturday,  when the Rutland Coroner, Captain S. J. Fowler, of Oakham, sat with a jury to inquire into the tragic deaths of three men attached to Cottesmore RAF station who were killed when  their bomber plane crashed during night exercises.

The plane left the aerodrome ground at 11.59 p.m. and a minute later its tail light was seen to disappear. Then followed several violent  explosions and flashes which lit up the sky.

Flying Officer Ian Alan Mead, Commander of A Flight, 35 Bomber Squadron, Cottesmore, said that on Thursday he was on duty on the flare path on the landing ground at the drome from 9 p.m. until night flying exercises ceased. At 11.58 p.m. he spoke to Pilot Officer Cooper who was in good health and appeared quite confident and happy. A minute later a witness saw the plane take off, the Pilot being accompanied by Sergeant Tompkins and Aircraftman Sweeney.

“When the aircraft was about 200ft. up” said witness “the tail light was well visible. A few seconds later I heard two distinct reports in quick succession similar to when this type of engine cuts out.  Almost immediately the tail light disappeared, and later there was an orange-coloured flash which lit up the sky and an explosion about 30 seconds later, followed by another flash and a loud report. I proceeded to the scene with Squadron Leader Chester and when we arrived all the members of the crew had been dragged clear of the wreckage which was burning fiercely. Mr Cyril Kettle was the first on the scene. He succeeded in removing the pilot, who was dead, and the other two, who had been thrown clear.”

Cyril Kettle, ironstone labourer, Barrow, said that at about midnight on Thursday he was in bed in his house when he heard a plane pass over. He thought it appeared to be missing fire as he heard it bang several times. “About a minute later I heard a crash” added witness. ” I jumped out of bed, looked out of the window and heard a loud bang and saw flames shooting up into the air. I dressed quickly and ran toward the plane which was now well on fire. When I was within 100 yards of the plane there was a second explosion and when I arrived I found that part of the plane was in a field on one side of a hedge and the remainder on the other side. Two of the occupants were lying clear of the blazing wreckage. One was dead and I eventually managed to pull the pilot clear. I undid the clothing of the man that was just alive and made him as comfortable as possible and waited until the arrival of the rescue party”.

Dr Gordon Purdy, of Oakham, who explained that he was acting as temporary medical officer at the aerodrome, said he visited the scene of the crash about 12.20am on Friday. Sgt Tompkins was alive, but the other two were dead. Pilot Officer Cooper had a fracture of the base of the skull and other injuries. Aircraftman Sweeney had a fractured spine and cut mouth, whilst Sgt. Tompkins, who was suffering from internal haemorrhage and shock, was removed to the aerodrome sick quarters and died shortly after admission.

Replying to the Coroner, Dr Purdy said that death must have been instantaneous in the case of Pilot Officer Cooper and Aircraftman Sweeney and Sgt Tompkins had multiple injuries to which he succumbed.

Flight Sergeant Bernard Victor Humphrey, of A Flight, said he did not see the accident, and it was impossible to tell exactly the cause because the machine was so smashed up and burnt. The airplane’s log book or maintenance sheet however showed that the machine had been daily inspected and that it was in a fit and airworthy condition.

Full military honours were accorded at the funeral of Pilot Officer Cooper at Cottesmore on Tuesday.

His remains were borne to their last resting place on a gun carriage, the coffin being draped in the Union Jack, and upwards of 100 officers and men from the aerodrome, including a firing party, were present.

The procession slowly wended its way from the aerodrome to Cottesmore cemetery, where a service was conducted by the Rector of Cottesmore, the Rev. E. M. Guilford, chaplain to the aerodrome, and the Rev. C. A. Brown, Vicar of Exton.

A large crowd, most of whom were women, assembled at the cemetery.

The Last Post was sounded by buglers from the aerodrome, and shots were fired over the grave by the firing party, whilst in the distance could be heard the dull drone of battle planes preparing to take to the air and circle the grave on tribute to a popular officer.

The body of Sgt Tompkins was returned for burial at St. Johns Church, West Grimstead, Salisbury.

No headstone was provided at the time to mark the grave and the Wiltshire Historical Military Society (WHMS) felt that as Sgt Tompkins was training for war, his grave should be marked in the same way as if he had died after 3rd September 1939.

To obtain a Commonwealth War Graves Commission headstone it was necessary to provide proof of a service funeral. Although the photograph proved this, there was no supporting documentary evidence available.

The WHMS therefore set out to raise the money to provide an identical headstone. This was achieved and on Sunday 5th May 2002 a dedication service was held at the graveside.

The service was conducted by Canon Michael Ward and attended by the sister and daughter of Sgt Tompkins and other family members. Representatives of the Salisbury branches of the RAFA, Aircrew Association, Royal British Legion and WHMS were also in attendance. 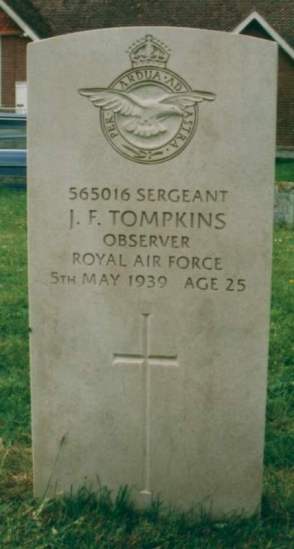 If you would like information on an airman who served with the squadron, or …..

if you have copies of photographs or documents that could be included in the archive and/or published on the website, or …..

if you have any corrections, comments or information,

It would not have been possible to progress this project without the help of a large number of individuals who contributed information, photographs and drawings for inclusion on the site.

I would like to take this opportunity to thank you all for your time and effort; it is very much appreciated